Like I said before, Dhaka is enormous. The ride to the Old Dhaka from Gulshan takes about an hour on Friday, which is a common weekend, but on a regular day it can take 2-3 or even more hours.

Every Friday the organization Urban Study Group invites everybody interested to join for a tour in the Old Dhaka. The Group consists of some architects and volunteers who are working on protecting old buildings in Puran Dhaka (Old Dhaka).

Last Friday I joined the tour and it was pretty intense. One thing to understand about Old Dhaka — even the locals don’t know it very well unless they live there and a woman wouldn’t go there alone even during the daylight. 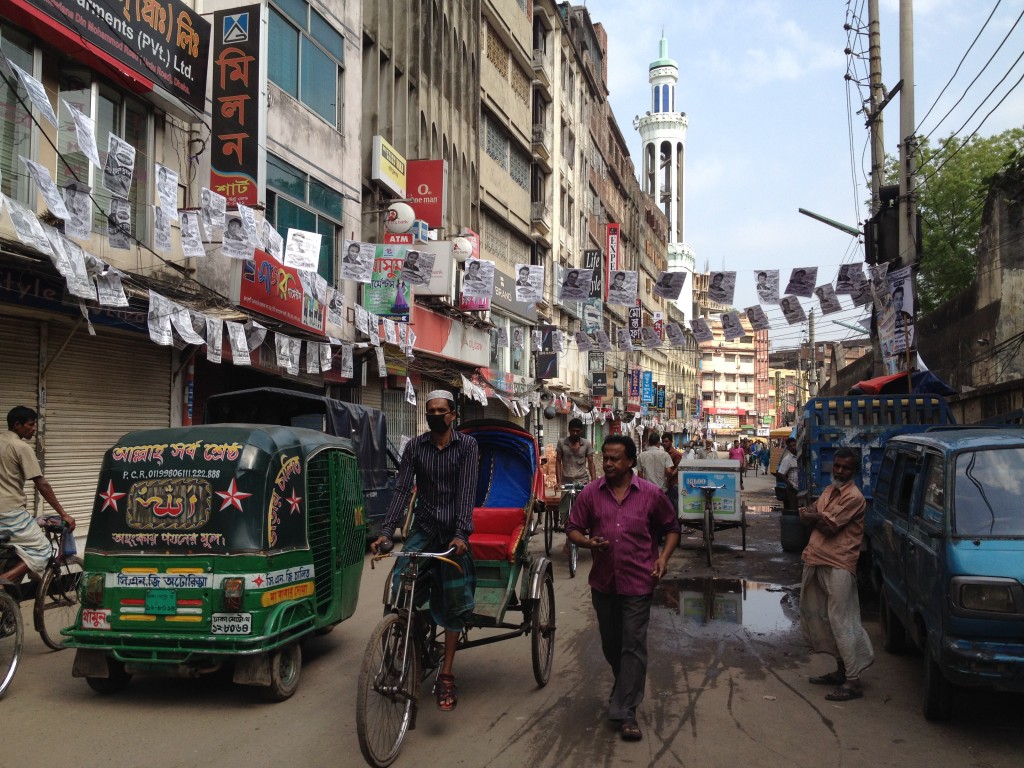 Tours change every Friday, but some buildings are still visited almost every time (from the words of those who it it a few times already).

This tour included a visit to two Mughal Caravanserais in the Chawkbazar area, a couple of 18th&19th century mansions of the former Hindu Zamindars and the palace of Ruplal Das (which was turned into a vegetable market).

All these buildings are in a very sad condition, 100 times Belgrade I would even say. And I personally was more fascinated by the people, how they live and what they do, so below you won’t find many pictures of crumbled buildings, but mostly people and surroundings of Puran Dhaka.

One of the funniest things you notice walking around Dhaka is many posters of some people with random objects on them. 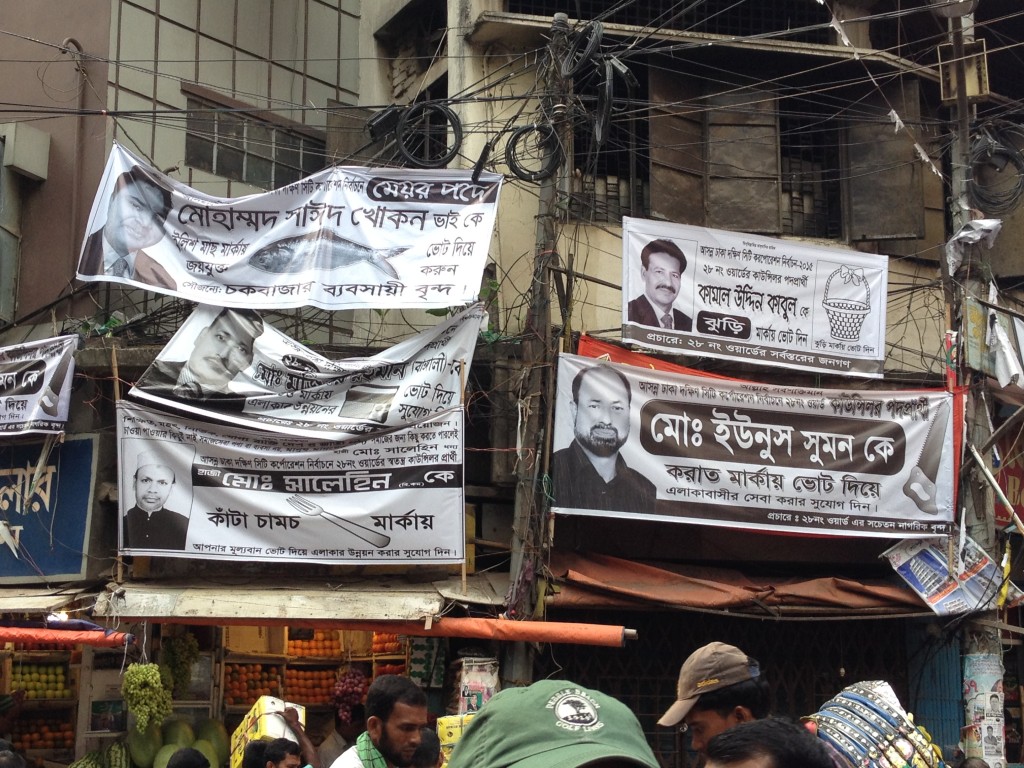 They are candidates for the upcoming election. Each of them has a symbol and all these symbols are very simple. So far we were told that the fish and pumpkin guys will most likely win. (There was also a couch guy, I would think that he has good chances too!) 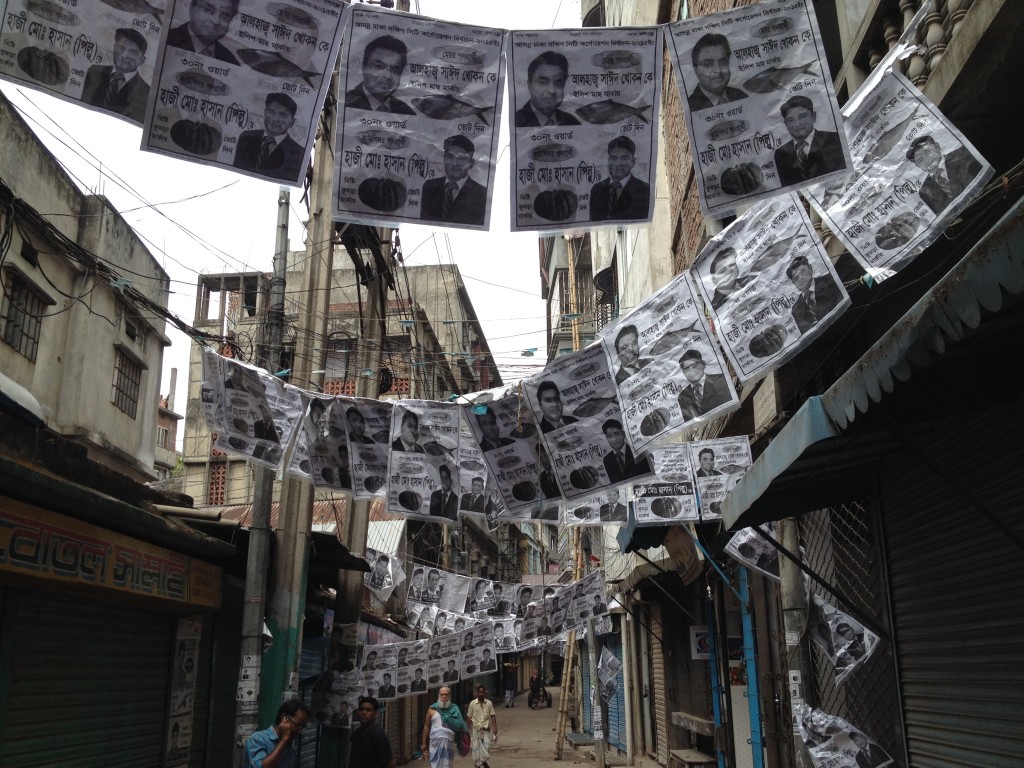 As you can see, each poster is in its own plastic bag. Plastic bags actually sort of prohibited in Dhaka, will tell a story about it some other time. 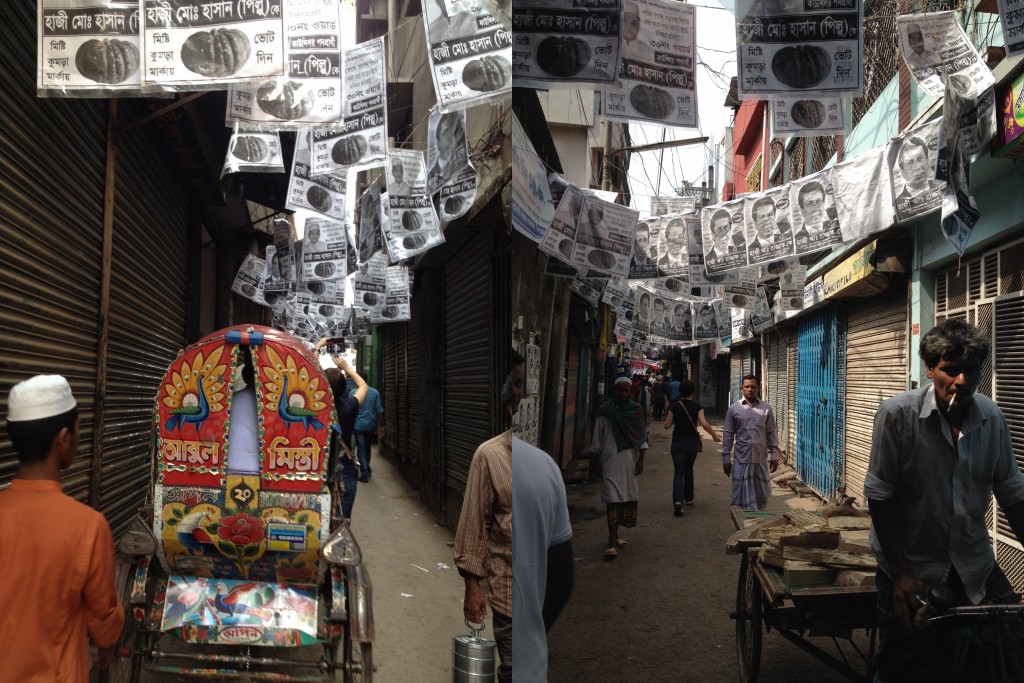 Here is a look from a rooftop we climbed at to check out the view to one of the Caravanserais. Fairly speaking, the view over the Caravanserai specifically wasn’t that spectacular, but the overall impression was very strong. 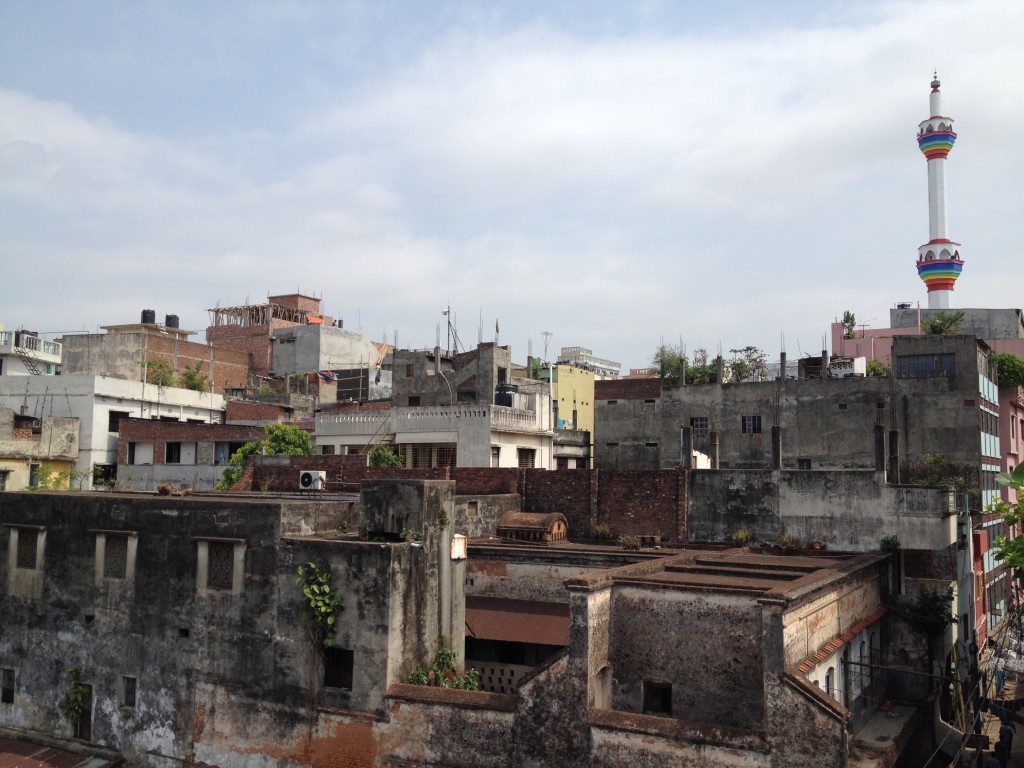 While climbing up the stair we even spotted somebody’s rings (hey Copenhagen!) 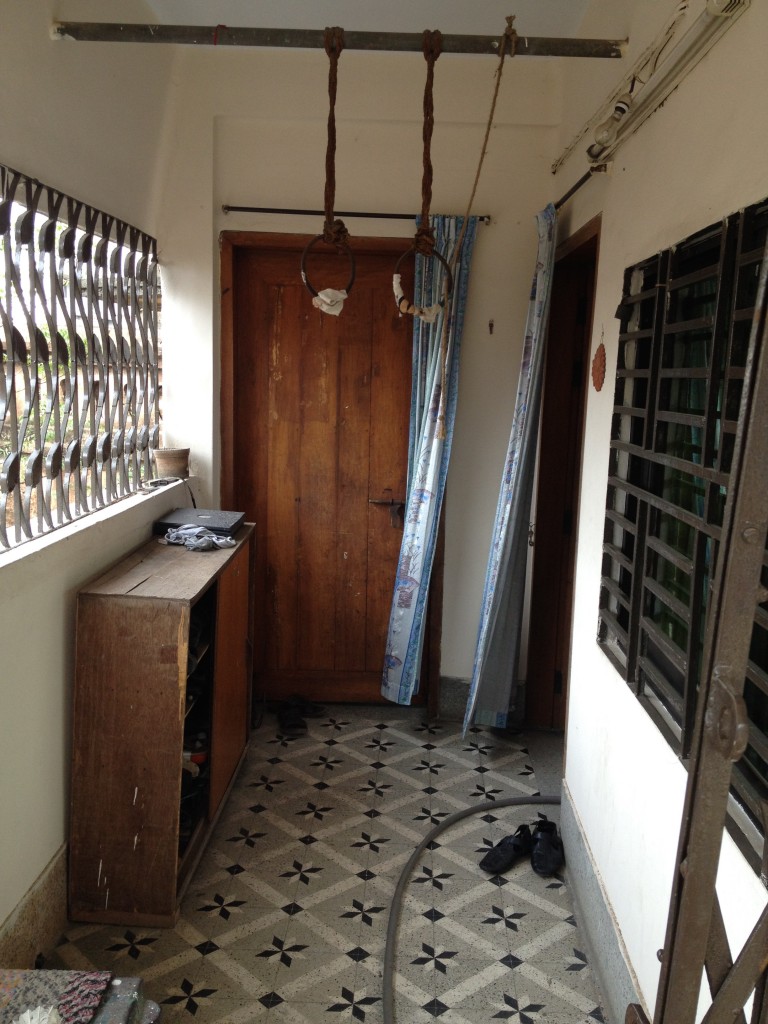 Others though don’t seem to need any gear to exercise. 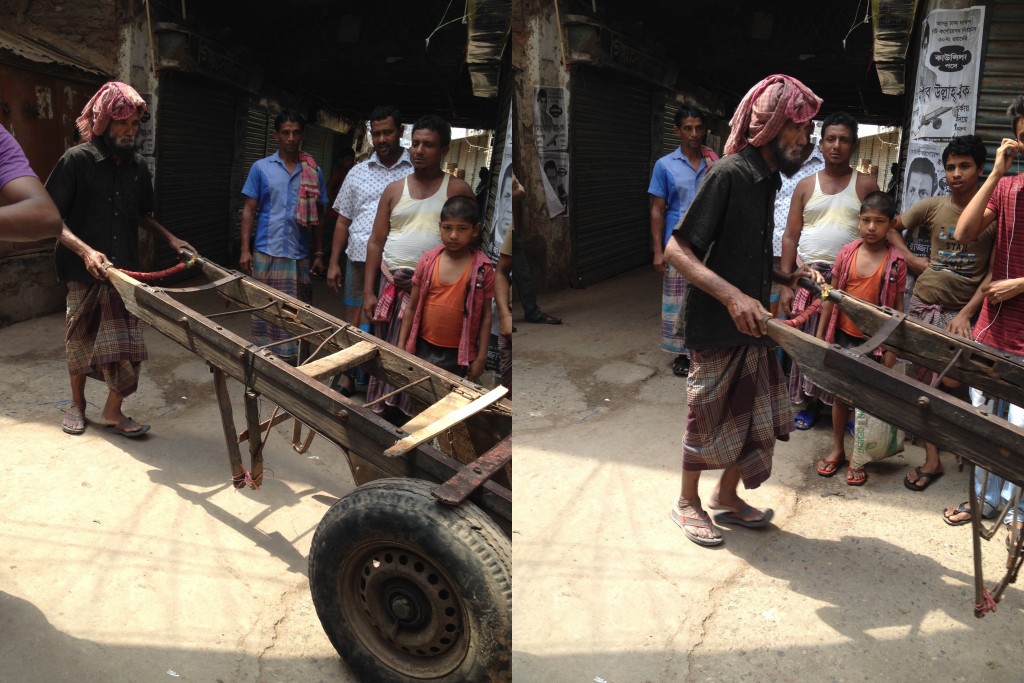 Btw, do you see people just standing and looking? That is a very common view. Staring is much more common in Old Dhaka, but still not as bad as I expected it to be. Most of the people will stare at you with a pretty grumpy face and even if you smile back at them it doesn’t help — they won’t crack a smile. I wonder if it is because of their hard life or for some other reason.

In-between we also visited a soap factory. And this was intense. Have a look for yourself. 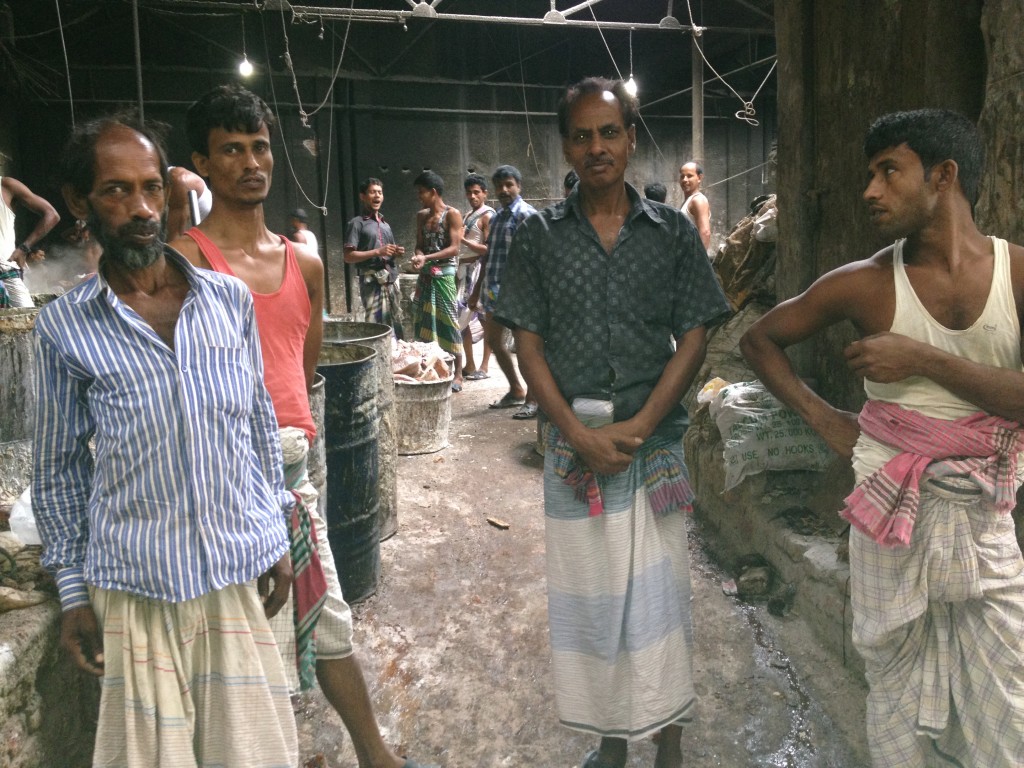 Do you see little kids working there? Well, according to the law kids cannot work until they are 16, between 16 and 18 they can work, but only with a doctor’s approval. Here it was a different case. From what I heard these kids make about 100 taka a day or, according to a different source, 1200 taka a month. 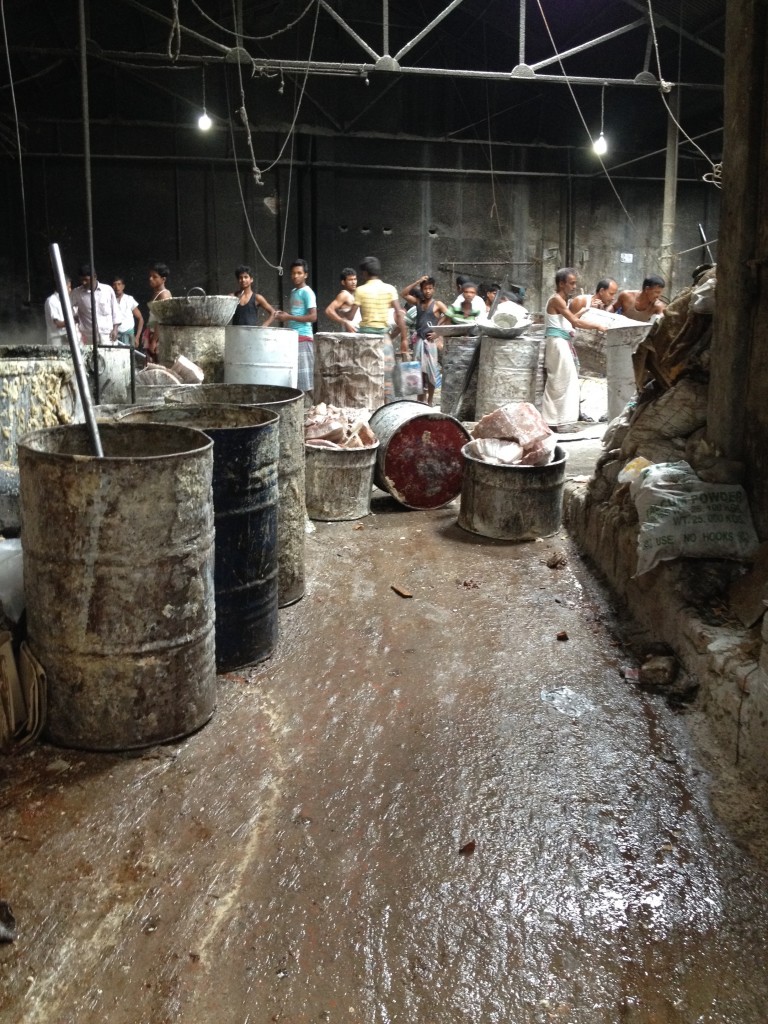 The second part of the tour including a boat ride, crumbled buildings of British and French architecture and more local faces comes tomorrow. Stay tuned!